Let Yourself Be Seen 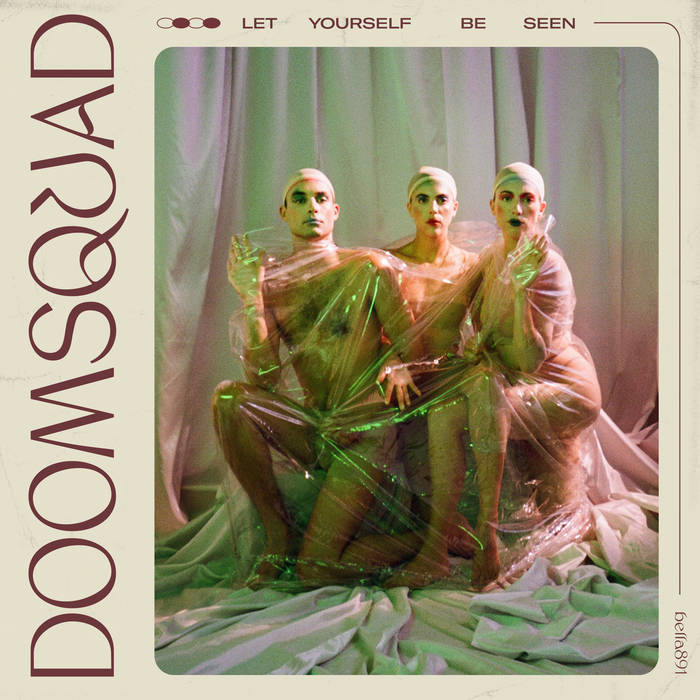 Even this far into the 21st century, the recent social media furore surrounding US congresswoman and free-style dancer Alexandria Ocasio-Cortez illustrated that the spectacle of someone dancing without compunction can still ruffle the right (and alt-right) feathers. In which case, all hail the third album from Toronto’s ardent, art-dance sibling trio DOOMSQUAD. Due for release on Bella Union on May 10th, Let Yourself Be Seen is the most assertive, ambitious, groove-sodden declaration of intent yet from Trevor, Jaclyn and Allie Blumas: the sound of dance floor believers and thinkers firing on all personal and political fronts, at a time when we need it most.

Even if DOOMSQUAD never lacked the courage of their convictions, Let Yourself Be Seen ups the stakes. On 2016’s Total Time, the trio issued invitations to free your mind, body and spirit over dirty bass-lines and hypnotic disco jams. And yet, their reliance on unspoken sibling intuition left them fearing that much of its “message and meaning” had gone unheard. Thus, the trio took a more forthright approach for their third album, aiming to “crystallise what DOOMSQUAD is and what it means to us. What we always knew but put at the forefront of this record is that DOOMSQUAD is a project of protest, catharsis and emotional and spiritual reconnection through music and, especially, through dance-music culture. It’s about activating the body on the most fundamental level, into states of change, release and reunion.”

Richly steeped in the influences of acid house, West African disco, spiritual jazz, NYC no-wave and new-age ambient music, Let Yourself Be Seen hums with a sense of vigorous, invigorating purpose. After the overture of ‘Spandrel’, ‘The General Hum’ sends out a buoyant new-wave rallying cry for maximised engagement just when the world seems intent on stifling it. “Is there a place for spirit anymore?” it asks. Kicking in with a percussive bustle that all but defies you to try and stand still, ‘Aimless’ answers in the affirmative.

Elsewhere on the album, DOOMSQUAD’s own dynamic thematic engagement alights on subjects ranging from formative influences to modern societal struggles and eco-crises. ‘Let It Go’ grapples with the challenges of social change at 140BPM, climaxing with a scalding guitar solo to match the heat of its questioning thrust. The mellifluous ‘Emma’ reflects on early-20th-century anarchist and activist Emma Goldman; ‘Dorian’s Closet’, meanwhile, honours New York drag queen Dorian Corey. “Let Yourself Be Seen was fuelled by the inspiration of outsider artists and thinkers before us,” say the band. “Through these songs, we get to glorify some of our heroes.”

DOOMSQUAD’S intent to carry their heroes’ “messages of empowerment, release and spiritual self-determination” to new audiences peaks on the title-track, where the album’s disparate parts build to a disco inferno with a call to “Let yourself be seen!” "The Last Two Palm Trees in LA" offers an empathetic take on a similar theme, based on the acceptance of ageing, before "Weather Patterns" steers a reflection on unity in the face of global crisis to a buffeting crescendo with a thrilling urgency.

The result is an album for fraught political times, charged by the impetus to bring “music back to the body”. Close-to-home influences on that score include Tanya Tagaq and Peaches, both of whom DOOMSQUAD have toured with; further afield, Peter Gabriel, Diamanda Galás, Genesis P-Orridge and Underworld numbered among inspirations. Meanwhile, as the trio’s creative process took them from a lakeside cabin to a studio in Toronto, they benefited from the input of kindred spirits such as Ejji Smith, whose virtuoso guitar-shredding propels ‘Let It Go’. Israeli jazz composer Itamar Erez adds watery synths to ‘Emma’, while a key studio collaborator was producer/artist Sandro Perri, whose credits include Barzin.

As for the future, DOOMSQUAD will soon take Let Yourself Be Seen to the live stage, an environment in which their convictions blaze with exhilarating life. “The dancefloor is our temple - the idea of the dancefloor as a utopian/protest space is the exact belief we carry with us. As much as we love making records, we love performing. The music we make is meant to be heard on a large sound-system. As performers, we are fuelled by the need to be in a live atmosphere.” And thrive in the live atmosphere they will, dates slated both in the US for SXSW and also a run of dates in Europe in May.

And if that need inspires others to voice their shared beliefs, such is DOOMSQUAD’s hope. “People change, ideas grow,” the band say. “And entropy is all around us. The fear that lies in the hearts of the elite patriarchy will soon die off, and the rest of us will be working together to repair what’s broken. And that is worth every bit of positive energy.” An album that honours its forebears by reaching towards a future worth fighting for, worth dancing for, Let Yourself Be Seen has positive energy in bright, sparking, forward-thinking abundance.

Bandcamp Daily  your guide to the world of Bandcamp